The Achebe family is teaming up with Dayo Ogunyemi of 234 Media, Joe Seldner of Seldner Media, and a few others to bring Chinua Achebe‘s African Trilogy, “Things Fall Apart,” “No Longer at Ease,” and “Arrow of God,” to the world through a television production.

The project is currently in development, no release date has been announced.

“Things Fall Apart”, his best-seller, depicts a society caught between its traditional roots and the demands of a constantly transforming world. Okonkwo, an influential member of the Igbo people, is introduced in Achebe’s most popular novel as he struggles to adapt as his village is colonized by the British.

We meet his grandson, Obi Okonkwo, in “No Longer at Ease,” a young man who was sent to a university in England and has returned, only to clash with the ruling elite to whom he now believes he belongs. The story of Ezuelu, the chief priest of many Nigerian villages, and his war with Christian missionaries is told in “Arrow of God.”

The chairman and CEO of AIDE, African Integrated Development Enterprise, Chidi Chike Achebe, who is the late novelist’s son, shared on his LinkedIn page that “Things Fall Apart – Achebe’s magnum opus – and other novels of the African Trilogy – No Longer at Ease and Arrow of God – to be adapted for global television audiences.”

Giving more details on the project, he stated that, “…the African writers will be central. We have two very senior Hollywood types of Nigerian heritage in the mix. Asian corporate types are knocking as well. This is a huge endeavour, but we have an excellent team (most are not mentioned in the announcement). Two of my sisters are Professors – one in history and the other in Africana studies. My mother is professor of Education. My brother a PhD in Igbo History from Cambridge. So we got this (To God be the Glory!).”

When asked whether “intellectual property rights have been duly scrutinised and negotiated,” he said, “Yes…An army of lawyers is stand by.”

We believe this moment makes the message of my husband’s work urgent, especially for Millennials and Generation Z who are challenging systemic racism and driving the new civil rights movement. Chinua Achebe’s recognition and centering of these issues from an African perspective make his stories more vital than ever.

The statement also revealed that the series will portray decades of wrenching societal change—from the end of the 19th century in “Things Fall Apart”, through the emerging 20th century in “Arrow of God”, and the mid-20th century pre-independence period in “No Longer at Ease”.

See the full statement below: 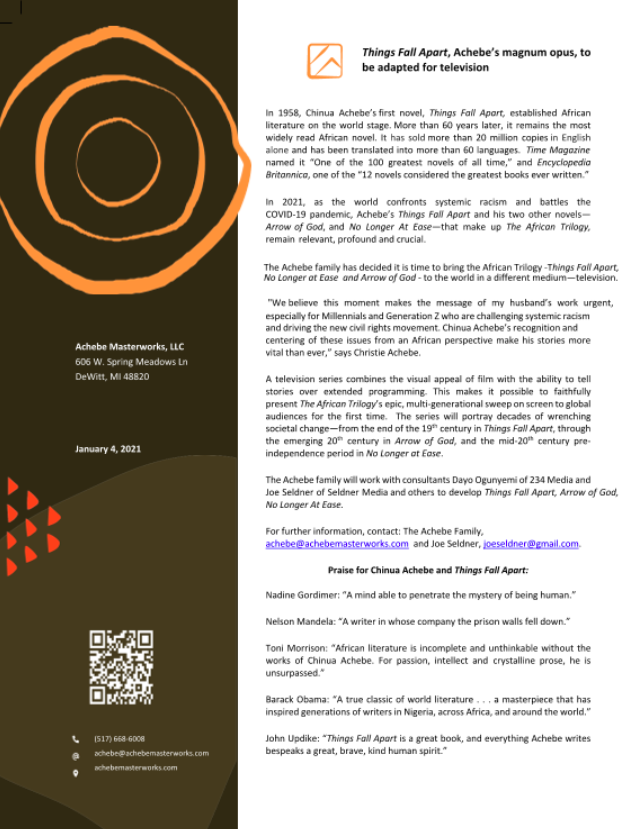